How Profits, Justice, And Vengeance Make Or Break Companies.

Start Reading Today! Available on Amazon in paperback or Kindle. Also available as a  digital download of the eBook in PDF format to read online or on your mobile device. 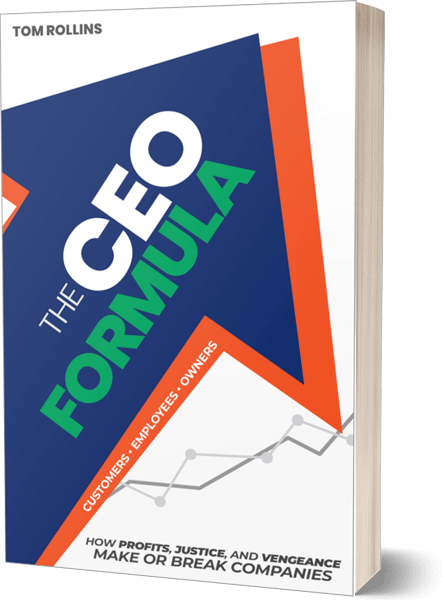 This book describes a uniquely powerful way to restructure a company to create more – many times more – value for its customers, employees, and owners. I sincerely believe that if the “CEO Formula” were followed, it would create greater wealth, reduce inequality in incomes, make capitalism more humane, ethically driven, and popular. Capitalism needs all of that, especially today. A disclaimer: My argument is rooted in the hard facts of profit and loss, not moral assertions, though I relish the irony that hard facts show that certain moral behaviors are heavily rewarded economically.

What You Will Discover

Reading the CEO Formula will help you understand: 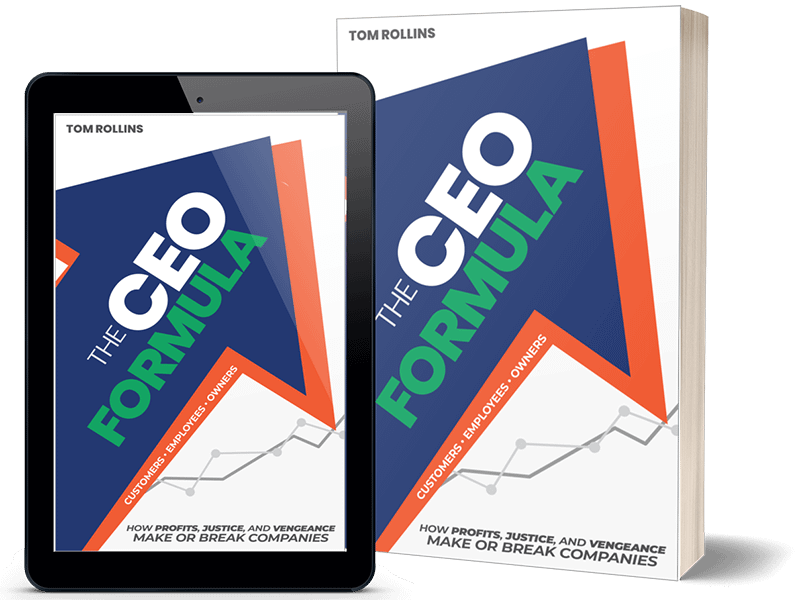 How to reposition a company to create far more value

How the CEO Formula changes the ethics of business

How following the prescriptions of orthodox economics destroys wealth

How unsatisfied Customers and Employees help your competitors

How to ruin a business by letting spreadsheet mavens run the place, even though you still need them

When I waded into the literature, data, and our immediate problems, I was reminded of Nietzsche’s aphorism that “the most fundamental form of human stupidity is forgetting what we are trying to do in the first place.” The more I read, the more I thought that business had an even more fundamental problem: No one had actually forgotten what business was trying to do in the first place because we’d never agreed on what businesses were supposed to do.

The world of business, after all these years, was – and is – surprisingly unclear or simply misguided about its own purpose. “Maximizing shareholder value” is still the orthodox description of the primary or sole purpose of a shareholder-owned firm. Yet we know intuitively and empirically that this is wrong. Intuitively, we know that fools can – and, empirically, many do – maximize shareholder value by diluting product quality, gaming prices, cutting compensation to employees, or by buying back company shares at high prices to boost them further. The fallacy of following this Scrooge-like logic of contempt for other contributors to a firm’s value becomes evident when customers and workers migrate to other firms.

The paradox is that making a firm’s primary purpose the maximization of shareholder returns will reduce those returns. The pathbreaking book Built to Last by Jim Collins and Jerry Porras summarized the remarkable evidence I’ll describe in more detail later: “Shattered Myth #3: The most successful companies exist first and foremost to maximize profits…..[T]he visionary companies make more money than the more purely profit-driven comparison companies.”

In 1985, Rollins became Chief of Staff and Chief Counsel to the U.S. Senate Committee on Labor and Human Resources, which enjoyed broad jurisdiction over domestic policy, including federal education spending.

Rollins left government in 1989 to found The Teaching Company. Also known as “The Great Courses,” the company recruits the nation’s best college professors and lecturers, records their lectures, and sells the recordings to the public. The company has been described by The New York Times as “a force in continuing education” and by The Wall Street Journal as “the colossus of its field.” Rollins served as CEO and Chairman until selling most of his interest in 2006; he served as director until 2011.

Tom is married to law-school classmate Victoria Radd Rollins, a now-retired partner of Williams & Connolly LLP. They live with their teenaged children, Tom and Kay, in McLean, Virginia. Rollins supports debate programs at Georgetown, The Potomac School, and through the Houston Urban Debate League. He received the National Speech and Debate Association’s Alumni Lifetime Achievement Award in 2015 and the American Council of Trustees’ and Alumni Merrill Award for outstanding contributions to liberal-arts education in 2012. Rollins has set two Virginia bench-press records and won the competitive shotgunning “A-Class” World Championship at the World English Sporting Clays tournament in 2012.

This book, testimonials, and the website content are not intended to and shall not be deemed to constitute a guarantee of results by Purchaser or any other agency. Tom Rollins is void of liability, and any content produced should be considered for informational purposes only and not a recommendation of a security or considered investment advice.